Find it hard to take a photo that shows your beloved pet in their best light? Dog owners know it can be nigh on impossible to get their little furry faces pointing towards the camera at the right moment. Not any more.
Dog lovers can now take perfect portraits of their pets every time thanks to a new app that barks for their attention.
BarkCam makes a variety of noises designed to make dogs look towards a smartphone’s camera allowing owners to take the ideal picture with ease. 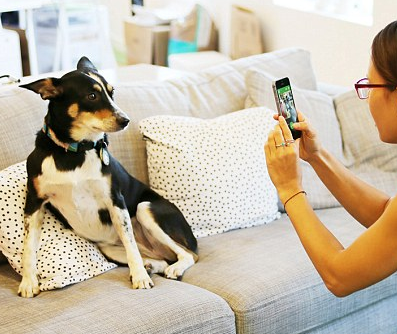 Famous Artists and Their Painted Dogs

Two famous artists and thier dogs

Painter Frida Kahlo’s home, Casa Azul, was filled with exotic pets with creative names — Fulang Chang, a.k.a. Bonito, an Amazon parrot (who would do tricks for butter), Granizo, a fawn, and Gertrudis Caca Blanca, an eagle. She also kept monkeys, parakeets, macaws, hens and sparrows and an Xoloitzcuintle (a Mexican hairless dog) named Mr Xoloti. Of her 143 paintings, 55 are self portraits which feature her beloved pets.

When modernist painter, Georgia O’Keeffe wasn’t painting, she was getting inspiration by taking walks through the rocky desert of New Mexico with her dogs, Bo and Chia (two of six Chow Chow breed pups she’d eventually own). During an interview with The Albuquerque Tribune in 1973, O’Keeffe said, “It seems to be my mission in life to wait on a dog.” While O’Keeffe’s Chow Chows inspired her, she and her dogs, in turn, inspired artist Marisol Escobar to create this sculpture “Portrait of Georgia O’Keeffe.”

The dog in the middle of the painting

“I included people on a first come first served basis, but sometimes put them in if they had a particularly interesting story,” Ushenko said. “The dog in the middle of the painting is Max, an ex-police dog who was brought in by his owner for his portrait.”

Asked about memorable encounters during her time in the building, she mentioned the “ebullient lady who started singing gospel songs. There was also one man who posed while I drew his portrait, then a few hours later I saw the police leading him away in handcuffs.”

As she spoke, a group of about six young people paused to inspect what was going on, though they stayed about ten feet away and didn’t say anything. A few minutes later, a smartly-dressed woman came right up to Ushenko and said: “My boyfriend and I pass by on our way to work every day, and I just wanted to say that I love this image, especially on this size canvas. I do some painting on the side, but nothing like this.”

The dog in the middle of the painting ……

Sammy is a painting dog.  Tail wagging and all!!

Over 100 years ago those famous dog playing poker paintings were created.  The artist, Cassius Marcellus Coolidge,  in the early 1900’s created 16 different paintings.

We laugh at them, disregard them but they seem to have passed the test of time.

Dogs are such a big part of our lives and paintings and dog just go together!! 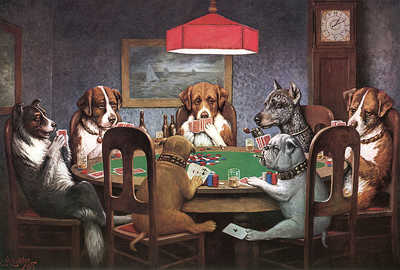 A friend in need.